Fire Booms – How do they work?

Containment booms are specially designed floating barriers that are used to prevent an oil or chemical spill from moving freely across a water surface. Containment booms are set in place to prevent an oil slick from entering a sensitive area or else they are positioned to contain the oil slick in a limited area so that a clean up operation can be easily implemented through skimming or burning.

Fire booms are used to contain large spills in a limited area so that the oil can be burned in a controlled way, thus eliminating the pollutant from the water.

How do fire booms work? 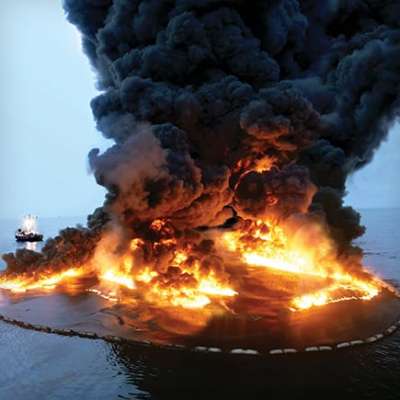 A fire boom keeps a burn under control

The purpose of a fire boom is to contain a surface oil spill with a specific thickness (2 to 5 mm) so that the oil can be burned off in a controlled manner. If the oil layer is too thin, the water acts as a heat sink which negatively affects the conditions for ignition and continuous burning.

The first known attempt to burn an oil slick on water was in 1958 in Canada. Fire booms have been developed and improved through a process of many tests and experiments, especially during the 1970s and 1980s. First generation booms were made of ceramic materials with metallic floats, while second generation booms are inflatable and water cooled allowing for much smaller storage space when they are not in use. These booms are also more resistant to heat damage and can be used multiple times.

Fire booms are used together with igniters, which set the oil alight. Airborne, helicopter based igniters can be used or floating igniters, which are dispatched from the attending ships.

How effective are fire booms?

There are three ways in which the effectiveness of fire booms can be described:

The containment of oil by fire booms is dependent on the design of the boom, the environmental conditions, and the way the booms are deployed into the water by the ships. For example, if the floating part of the boom is too high above the surface it can act as a sail in windy conditions, which will cause the boom to be driven through the water. This can cause the oil slick to break up and and escape the contained area. Typically, booms are effective to contain oil where the flow rate of water through the boom does not exceed 0.7 knots.

No boom is 100% immune to the effects of the fire during burn operations, but inflatable, water cooled fire booms are proven to be very effective with burns lasting several hours. The longest burn on record using fire booms is recorded at just under 12 hours during the Deep Water Horizon incident.

Burning surface oil while contained by fire booms is an effective means to deal with large scale oil spills. Only 3 to 5 percent of residual oil is left after the burn is completed.

How were fire booms used in the Deep Water Horizon incident?

The Deep Water Horizon incident in the Gulf of Mexico is the largest oil spill from an industrial incident in history. Over the duration of the leak, up to 4.9 million barrels of oil were released into the ocean.

Due to the scale of the incident, 15 burn teams were established and a total of 411 controlled burns were carried out over a period of 2 ½ months. Fire booms were brought in from multiple manufacturers and locations in order to cope with the volume of oil.

It is important to note that burning oil does create airborne pollution which should be monitored and controlled due to the hazardous nature of of these pollutants. During the Deepwater Horizon incident, the Environmental Protection Agency was involved in monitoring the emissions for health and safety reasons. Aerial surveillance was also critical for control and co-ordination between teams.

Want to find out more about Fire Booms and how they work? Or would you like additional information about different kinds of containment booms and where they should be used?

Check out our website or contact one of our expert team. At SpillPro, we are the experts in containment booms of all types and using fire booms to burn away a spill. We can answer any queries you may have.

How Containment Booms are Keeping the World's Waterways Clear

Do you know your foam-filled booms from your fire booms? Can't decide which one's right for you? Read how three types of boom have helped organisations meet their Environmental Duty of care ... Read more

What are the types of containment boom?

These are the key technologies used in the cleanup of large scale oil spills, such as the Deepwater Horizon spill ... Read more