How Containment Booms are Keeping the World's Waterways Clear

Containment booms. They're deployed around the world to prevent oil leaking into rivers. They facilitate controlled burns and protect shorelines from potentially catastrophic oil spills. And they help keep landmark rivers and bays clear of refuse.

Here are three great examples of how containment booms in Australia - and around the globe - are aiding conservation efforts in rivers, bays and oceans:

The stunning Opera House. The imposing Harbour Bridge. The old-time charm of Luna Park. They all help make the Sydney Harbour panorama one of the most recognisable sights in the world. But long before the first roller coaster roared around Milson's Point, it was crystal blue waters that first drew crowds to the harbour.

And while the Emerald City harbour's water may still look sapphire-clear to the naked eye, a history of poor site management means the bay is far less clean that it may appear.

Turquoise from a distance. But Sydney Harbour's pollution blues lurk beneath the surface. Image courtesy of wikimedia.org

That's why organisations like NSW Maritime, whose job it is to preserve biodiversity in Sydney Harbour, employ only the most effective environmental management solutions. Because they know the last thing the marine environment needs - particularly its marine life that includes nearly 600 species of fish - is floating detritus adding to the bay's high dioxin levels. That solution arrived in the shape of the Permafence permanent fence boom - a containment boom example noted for its durability and reliability.

Deployed permanently in Sydney Harbour, the Permafence effectively controls floating waste in the bay by trapping floating garbage. Capturing everything from light floating rubbish to heavy logs, the Permafence allows easy collection and disposal of detritus - ensuring the only thing crowding the famous waters is the hoards of sightseers.

It's that same principle of effective containment that helped contain the infamous Deepwater Horizon oil spill in 2010; where the Permafence uses containment techniques to remove rubbish, the Fire Boom uses it to control the spread of spilt oil.

So when an uncontrollable blowout caused 4.9 million barrels of oil to spill into the Gulf of Mexico, Fire Boom helped manage the aftermath.

By the time the Deepwater Horizon well was capped on 15 July 2010, an estimated 219,000 to 309,000 barrels of oil had been removed from the gulf. That was thanks in large part to Fire Boom's highly heat-resistant and water-cooled construction which facilitated in-situ burns lasting up to 12 hours.

In these controlled burns, several different types of fire-resistant oil boom contained the spilt oil for safe burning-off; on 18th June alone, an estimated 50,000 to 70,000 barrels of oil was removed from the marine environment. And while a range of containment solutions were deployed during these burns, it was the Fire Boom that proved the most successful oil containment boom example. 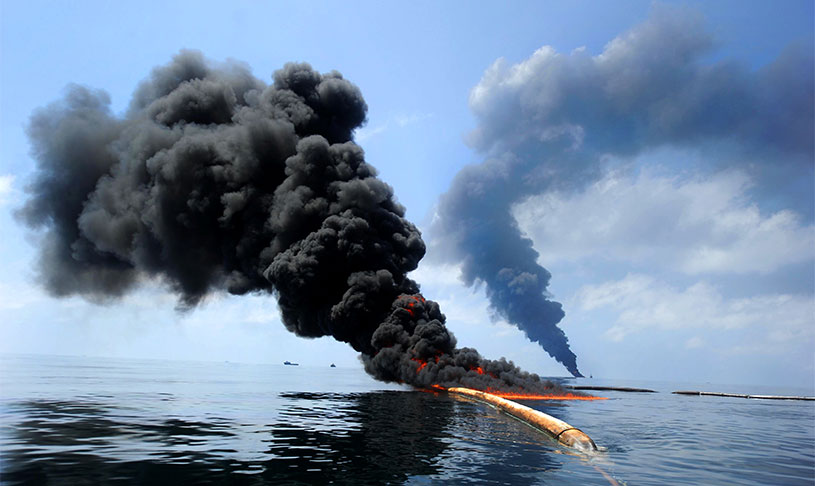 In Papua New Guinea, ExxonMobil had their own contamination threats to mitigate. At their remote Hides plant, situated over 700km from Port Moresby, they needed to ensure hydrocarbons from their gas production processes did not enter nearby waterways. 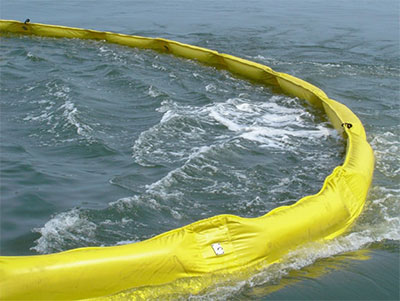 Foam-filled booms like this one prevent hydrocarbon contaminating waterways in Papua New Guinea.

Their gas field is situated on a river, which in turn, flows into a nearby lake. The river also passes through their plant, making the chances of accidental contamination high. So in order to prevent river and lake pollution, ExxonMobil deployed a Foam-filled Boom.

Once moored in place, the Foam-filled Boom begins to live up to its name - with foam being used to inflate the boom. Closed-cell floats with welded pockets mean a 100% watertight barrier, ensuring hydrocarbons are confined to the "boomed" area. And even if the outer fabric is damaged, the boom will hold together.

The boom spans the entire width of the river, effectively "booming" the area from bank to bank. The result is clean waterways, helping ExxonMobil minimise their impact on the fragile Papuan environment.

Following a global search for a new work boat supplier, SpillPro is partnering with Water Witch. Their rich history and range of high-quality boats earned them the contract as our new supplier ... Read more