How self launching skimmers are innovating cleanup rates

A new generation of oil skimmers has radically changed the rate at which large ocean spills can be cleaned up.

A competition launched by the X Prize Foundation was the inspiration that led to these innovations. The X Prize Foundation is committed to technological advance. This specific prize was sponsored by environmental activist, Wendy Schmidt, who set a target recovery rate at more than double the previous standard.

The system that won the prize actually delivered an oil recovery rate of 1,060 m3 per hour (4,760 gpm), which far exceeded the target of 2,500 gpm. Using the lessons learned from this competition, the Elastec X150 skimmer was born.

How do self launching skimmers work? 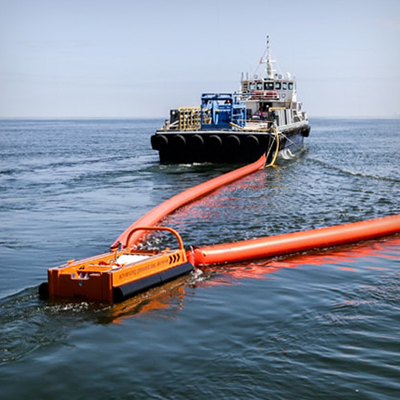 How does the skimmer remove oil?

The X150 self launching skimmer consists of 2 shafts with 5 grooved plastic disks mounted on each. The disks are partially submerged in the water and as they rotate, oil sticks to the plastic and is scraped off into the collection system. The large surface area created by the disk construction is what gives the X150 skimmer its very high oil recovery rate of 2,500 litres per minute.

Oil is contained in the retention hull, which expels water so that water does not take up recovery pump capacity. Oil is pumped via the discharge hose to the ship or to a tank onshore.

How is the skimmer stored and launched?

The X150 skimmer is stored in a 6-meter container, which holds the skimmer itself and all the accessories for use. A wireless control panel enables operators to launch the skimmer from the stern of a ship using telescopes and winches. In total only one ship and three personnel are needed to launch and operate the X150. In contrast, other skimmers require two vessels to be able to tow the skimmer with booms so that spills can be directed into the skimmer’s path.

What accessories are used with the X150 skimmer?

A single sweep boom connects the X150 skimmer to the ship, with the discharge hose built into the boom. A BoomVane is used to position another boom to direct the oil into the skimmer instead of using a second towing vessel.

Washington State has developed an oil spill readiness plancovering more than 1,600 commercial vessels that enter the Puget Sound and Grays Harbour. The X150 self launching skimmer is a central part of this plan and has been stationed at Neah Bay. The aim of the response plan is to enable a speedy and effective response to maritime incidents. In turn, this will help avoid oil spills from reaching sensitive ecological environments in the area. 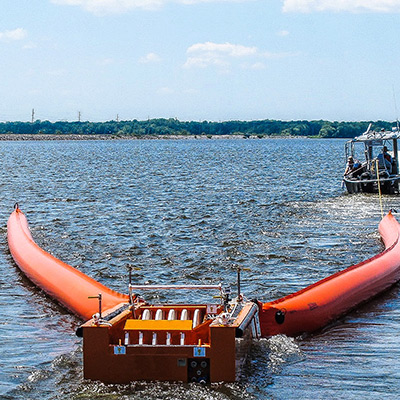 Sea exercises have been carried out in the Gulf of Mexico in the area where the world’s largest oil spill took place in 2010. It is estimated that the Deepwater Horizon spill resulted in more than 4,900 barrels of oil spilled into the sea. This involved the use of multiple different types of skimmers and dispersant technology to control and eliminate the oil. Having X150 skimmers available for these large-scale spills would make a significant difference to the effectiveness and speed of the cleanup operation.

Various spill response organisations have been established around the world to consolidate the resources needed to cleanup large oil spills in each region.

The Australian Marine Oil Spill Centre (AMOSC) is an organisation made up of oil industry companies that stock and manage oil spill response equipment to deal with a maritime incident. AMOSC was established after the Exxon Valdez incident in Alaska in 1989 to facilitate better preparation for future disasters. A number of warehouses have been established by AMOSC in key areas of Australia including Geelong, Perth, Exmouth and Broome. The X150 skimmer is the kind of resource organisations like this are putting in place so they can respond quickly to a large-scale oil spill and thus protect the environment from excessive damage.

Contact SpillPro for more information about self launching skimmers

Call our expert team on 1800 368 450 today to discuss the best self launching skimmer solution for your business.

These are the key technologies used in the cleanup of large scale oil spills, such as the Deepwater Horizon spill ... Read more

Oil skimmers are used to remove oil that is floating on the surface of water. They are often used in circumstances where oil has been spilled and is threatening the environment, but they can be use ... Read more